'Prime ministers usually don't go on trips like that without something to announce': John Manley

Prime Minister Justin Trudeau speaks to media in Beijing, China on Monday. "A trade agreement is not a small thing. It's a big thing," he told reporters. (Sean Kilpatrick/Canadian Press) 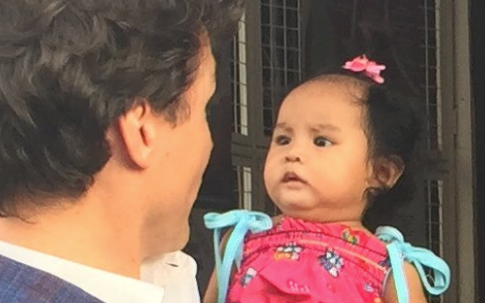 [ooopsy]
Charles Dickens wrote a classic when he penned Great Expectations. Political leaders, on the other hand, make the classic mistake whenever they create expectations they don't meet.
Justin Trudeau was no exception Monday as he left the Great Hall of the People in Beijing without an expected announcement that Canada and China would begin formal free trade negotiations.
Not that it was the prime minister's fault.
His trade minister, François-Philippe Champagne, insisted during an interview Sunday with CBC Radio's The House that issues remained to be worked out. And Canadian officials made the point to reporters in an off-the-record briefing before the trip.
It's just that few people were buying the line.
Most business leaders, diplomats and political pundits thought this week's trip to China — with its high-level meetings between Trudeau and the top two Chinese leaders, with its stated focus on trade, closer ties and shared prosperity — would produce an announcement that after four rounds of exploratory talks and months of efforts, Canada and China would finally make a commitment.
"Prime ministers usually don't go on trips like that without something to announce," said John Manley, the CEO of the Business Council of Canada, who was one of the few people cautioning Trudeau to proceed slowly after being the sole holdout two weeks earlier in signing an agreement in principle with Japan and the other members of Trans-Pacific Partnership.
The two sides have been engaged in exploratory talks for a year. China made it clear it was ready to take the next step, to try and forge its first agreement in North America, and its first with a member of the G7 group of industrialized nations.
So what happened?

Chill in the room

Early on in the day it appeared there were issues. Chinese and Canadian officials could be heard arguing about the Canadian media's access to the photo op of the two leaders. It continued, off an on, for more than an hour.
Once inside, Li and Trudeau made a few perfunctory remarks about the importance of the relationship before signing agreements a few minutes later to boost Canadian agricultural exports, and two others on energy and education.
Important things to be sure. Just not the big one. 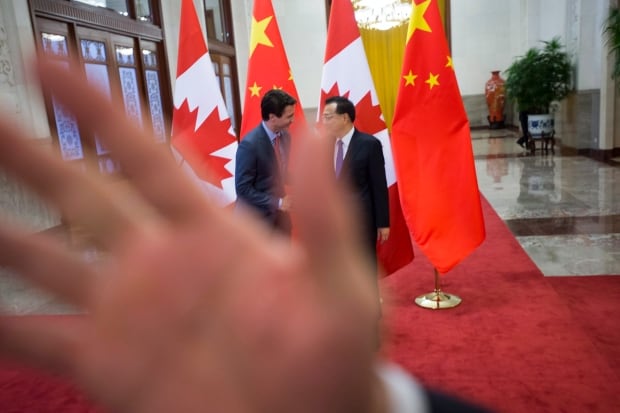 A security guard blocks a photographer as a picture is taken of Trudeau being greeted by Chinese Premier Li Keqiang at the Great Hall of the People in Beijing, China on Monday. The bizarre incident happened following an argument between Canadian and Chinese government staff regarding Canadian journalists and prime ministerial staff being allowed to witness the photo opportunity. (Sean Kilpatrick/Canadian Press)
Then the prime minister's office told Canadian reporters the Chinese decided to cancel a planned news conference, insisting the two leaders read only prepared statements. No reason was given.
When they began, there was a definite chill in the room. Premier Li Keqiang, as the host, went first.
"We agreed to uphold global trade liberalization," he said, barely looking up from the pages in front of him. "On the bilateral [free trade agreement] we will continue exploratory talks. China is open to such talks … to the process and the content of such exploratory talks."
When his turn came to speak Trudeau went back to his standard refrain. Canada is interested in signing only a good deal, and on its own timeline. A deal that is true to the progressive goals he's set out in all trade talks: protection of labour and gender rights, and a commitment to battle climate change.
Li made it clear China won't have the first two. He did say his government will try to combat climate change, a potentially significant market for Canadian clean-technology firms like Hydrogenics, an Ontario-based company that makes hydrogen fuel cell batteries set to be used in Beijing buses. Trudeau tested an emissions-free bus that uses the company's technology earlier in the day.

'It's a country that doesn't play by the rules.'- Stephanie Carvin

When he finally met late on Monday night with Canadian reporters covering his trip, the first question was the obvious one: what happened?
"A trade agreement is not a small thing. It's a big thing. Canadians understand how important it is to get it right and we are ensuring that the progress made today in discussions that we will be able to continue moving forward in a responsible way," the prime minister said.
"This would be, for Canada, a significant trade agreement that we will eventually move forward because of the scale of the Chinese economy."

Two-way trade between Canada and China totalled about $90 billion last year. But two-thirds of that is Chinese exports to Canada. It is a lopsided relationship, one that's been getting more lopsided since 2012. With trade forecast to more than double by 2025, it's clear that discrepancy is going to get worse.
That, in large part, is the thinking behind a free trade deal. It would make it easier for Canadian companies to get into China. It would, as Champagne said this week, help ensure China's huge state-owned companies play by the same rules as private firms rather than as extensions of Chinese foreign and economic policy.
People in Canada are relieved that formal talks appear to be some way off. 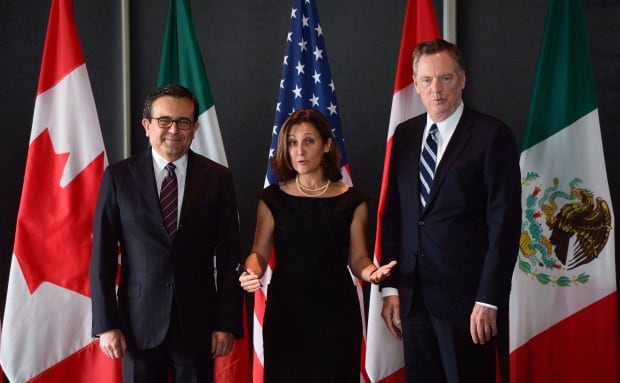 Minister of Foreign Affairs Chrystia Freeland meets for a trilateral meeting with Mexico's Secretary of Economy Ildefonso Guajardo Villarreal, left, and Ambassador Robert E. Lighthizer, United States Trade Representative, during the final day of the third round of NAFTA negotiations. Talks remain stalled. (Sean Kilpatrick/Canadian Press)
The Conservatives, have warned darkly about the dangers of a trade deal with a country that doesn't ascribe to a western notion of humanity and values, that pays wages far below those in North America, that has been behind cyber attacks against Western governments and business and pays no mind to Trudeau's so-called 'progressive values'.
"I think the main thing to remember is that, when it comes to dealing with Chinese, that it's a country that doesn't play by the rules," says Stephanie Carvin, a professor at Carleton University's Norman Paterson School for International Affairs.
But for Trudeau the choice, inability or difficulty in getting formal talks underway comes as NAFTA talks remain stalled. And only two weeks ago, Trudeau left the other leaders in the TPP confused and furious for not joining them in signing a preliminary agreement Champagne had successfully negotiated to insert Trudeau's progressive elements.
In both cases there were great expectations. The final chapter of the TPP remains to be closed. With China, the opening lines remain nothing more than a work in progress.
Posted by Conan Doyle at 11:19 AM