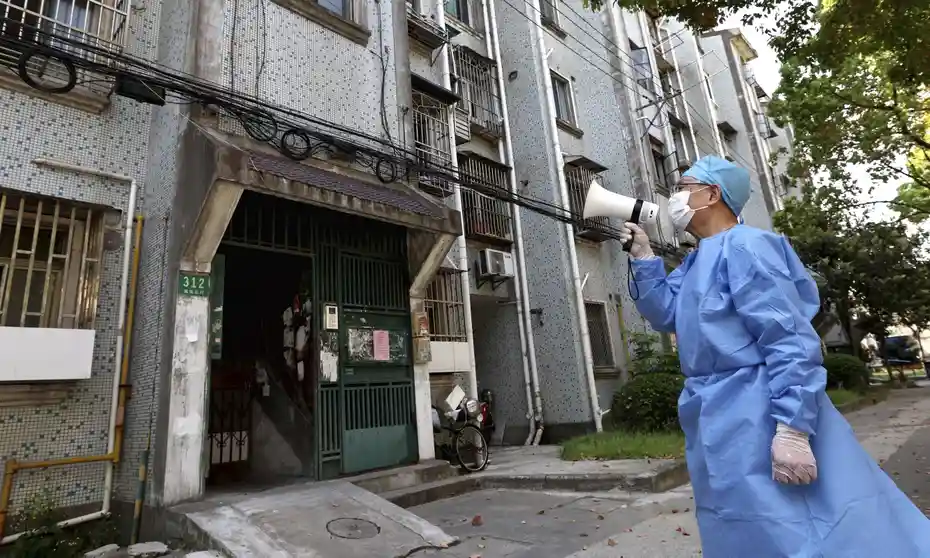 China’s strict system of censorship is struggling against the onslaught of complaints from Shanghai, as residents find creative ways to get around bans on words, hashtags and even lyrics from the national anthem.

As the weeks-long lockdown in the city of 25 million prompted widespread food shortages, delivery failures and fatal healthcare disruptions, the government has urged residents to harness “positive energy”. Dystopian banners warn people to “watch your own mouth or face punishment” and drones admonish apartment dwellers. But far from inspiring residents to fall in line, the methods have made tensions grow.

On WeChat, groups have shared the names and stories of people who died, either with Covid or because the lockdown delayed their access to healthcare. They have criticised local authorities and China’s continued commitment to zero-Covid as the world opens up, shared videos of residents detained, bundled out of their apartments, or treated roughly by pandemic workers.

Much of these posts have been quickly deleted, including an article by a leading Chinese health expert, Dr Zhong Nanshan, that cautiously urged China to move away from its zero-Covid commitment. Platforms have also censored videos of protests and outrage over the separation of Covid-positive children from their parents. A Caixin investigation on unreported deaths quickly disappeared.

In one video shared online, pandemic workers appeared to be forcing their way into a man’s flat to demand he remove a critical post, while others claim to have been visited by police over their tweets. Weibo censored the term “buying vegetables in Shanghai” as people complained of food shortages (although one resident wryly noted you could still post about buying cake). By Sunday, even the first line of China’s national anthem – “Stand up! Those people who refuse to be slaves!” – had been banned as a hashtag.

But the volume of forbidden posts appears to be challenging the censorship system and workers.

Last week, for a few pre-dawn hours on Weibo, criticism of the state flowed unusually freely, as users flooded top two trending – and therefore sanctioned – hashtags with complaints. Under the topics “the US is the country with the largest human rights deficit” and “Shanghai handled several rumours regarding Covid”, the posts were often sarcastic or satirical, evading bans by replacing “China” with “US” in their criticism. Posts stayed online for hours, prompting one person to joke the censors must have escaped the pressures of China’s ubiquitous ‘996’ culture of overwork.

“We went from the [February story of a Chinese woman found chained in a shed], to the war in Ukraine, to Covid in Shanghai in pretty rapid succession. How far do they allow people to discuss these topics in depth?”

“They can’t fully censor those topics, and then the constant blaming of the US for everything seemed to break the camel’s back, so netizens turned the tables, and now the censors are scrambling.”

Dong Mengyu, a journalist focused on internet censorship, said the mechanisms of censorship were the same as always but “the creativity of dissent does pose challenges for censors”.

“The volume of dissent reminds me of what we saw during the early days of the Wuhan lockdown, particularly following the death of doctor Li Wenliang and the censorship of an essay about Dr Ai Fen,” said Dong. Both had been punished for speaking out about the emerging virus. Following public outcry after his death, Li was later officially lauded as a hero.

In a possible sign that they needed more tools, on Friday several social media platforms announced they would soon be publishing the IP addresses of users, in order to combat “spreading rumours”.

In a post from Friday, still online at the time of publication, one person hijacked the US human rights hashtag to deride a planned Chinese state media broadcast intended to “inject positive energy” by highlighting “good” elements of the lockdown. The event was later cancelled after online backlash.

“The epidemic has made the Chinese see a lot more clearly,” they posted. “Chinese people are obedient, but they’re not stupid”.

Smith said Chinese authorities used to fear simultaneous street protests breaking out across different cities would be what challenged Beijing’s hold on the population. “I’m not sure if they ever thought something similar could happen online, but it is happening.”By Monday complaints still littered the hashtag about US human rights, as people posted photos of surveillance cameras installed in female university dormitories as a “pandemic measure”, of mocked up polls claiming people were living a harder life than anyone in Russia or Ukraine, of a dog beaten to death by epidemic workers, of the removal of all residents (without pets) from a village north east of Pudong to disinfect it after a cluster of cases.