“No person shall urinate or defecate in or upon any street, arcade, vacant land, river, canal, ditch, drain or watercourse or in any place to which the public has access except in any sanitary convenience provided for such purpose.”

The law on public health has been strictly enforced in Singapore through the years, and it is important for the authorities to do so, given how small the island is and how compact it has become.
Such enforcements have resulted in Singapore having a reputation as one of the cleanest cities in the world. Indeed, those old enough will remember Singapore being touted – and recognised – as a garden city, with clean streets and top public hygiene standards.
However, in recent times numerous incidents of people urinating and defecating in public - including at void decks, inside trains, in elevators - are causing alarm, and raising questions of whether laws protecting public health need to be relooked or enforced even more strictly.
On Thursday, 13 August, website The Real Singapore reported a lady apparently relieving herself in public beside a MRT station in Buona Vista. It is unclear if she was urinating or defecating. (Picture above.)
After she was done, she could be seen wiping herself.

Her behaviour has caused an uproar online, with many slamming her for her anti-social act.
But hers is just one of many incidents in recent times. (Please see pictures below.)
When Singapore was starting out as an independent, sovereign nation, the government embarked on numerous public awareness campaigns to stomp out such public nuisance, including littering and spitting.
The government even made it a punishable offence to “expel mucous from the nose upon or onto any street or upon or onto the floor or other part of a public service vehicle, a place of public resort or any place to which the public has access.”
That law still stands, by the way.
The government had also gone the length to install sensors in elevators of HDB blocks to deter urinating, even though some still find it hard to resist relieving themselves there.
Several weeks ago, for example, the Tanjong Pagar Town Council put out the following poster of a woman urinating in an elevator, to urge the public not to do what the lady in the poster had done.

Perhaps the authorities, besides taking a stronger stance against such behaviour, should also start conducting public campaigns again to raise awareness of the threats which such anti-social behaviour presents to public health.
The penalties for contravening the Environmental Public Health Act are as follows:
Any person who contravenes any provision of these Regulations shall be guilty of an offence and shall be liable on conviction —

What do you feel about this? Please click here to vote your stance on this: “Photo Of PRC Woman Peeing Onto MRT Station's Floors Very Disturbing”.
-------------------
Here are some incidents in recent times: 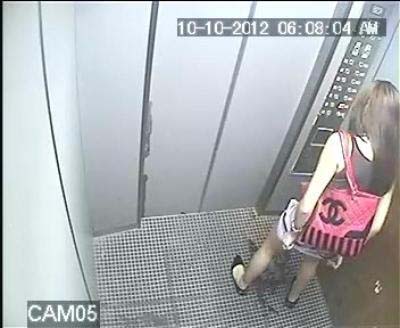 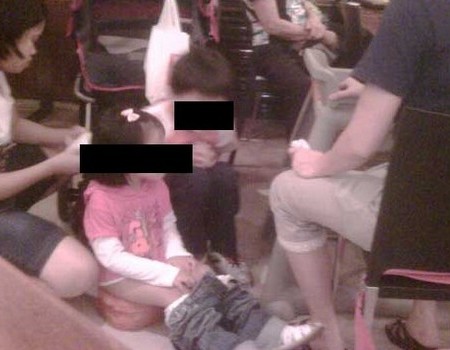 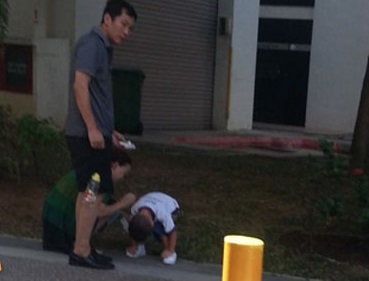 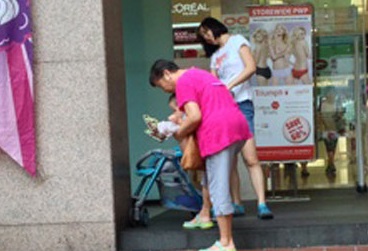 Urinating onto floor at Chinatown

Defecating in drain in Chinatown 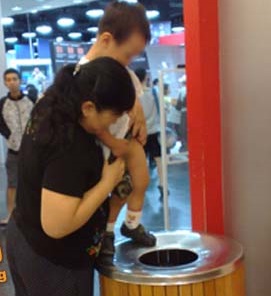