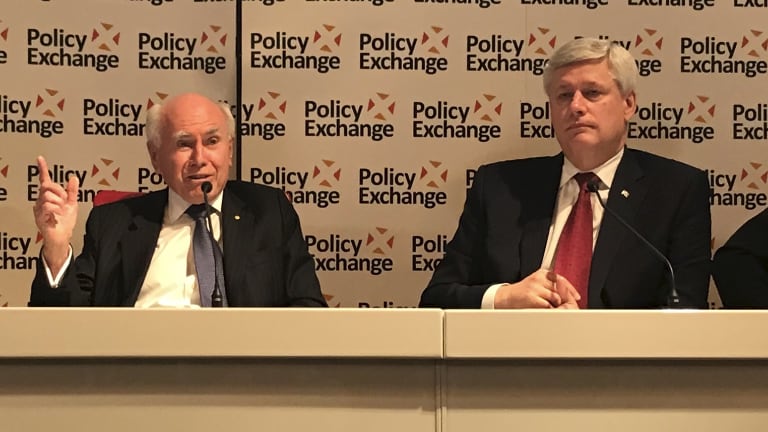 John Howard has warned that China is “very interested” in using its big diaspora of citizens, including the one million in Australia, to further its power and influence.
However he also emphasised that Chinese expats made “terrific” Australian citizens and contributed enormously to our nation.
Speaking at a conference in London on the Five Eyes intelligence network, the former Australian prime minister warned that China was “asserting herself” and it was crucial to use our own and allied intelligence agencies to work out what was going on.

He was responding to a question about the biggest challenges facing the international intelligence community, with Russia mentioned as among the West’s adversaries.
“There is a big difference in China’s position … in the category of potential threats: China has a massive diaspora in South East Asia,” Howard said.
“One million of Australia’s population… are ethnic Chinese background. [They are] terrific citizens making an enormous contribution to our nation but it remains the case that China is very interested in the capacity to use those people to further her power and her influence.
“[China] is asserting herself in a very significant way and I think the capacity of our intelligence agencies to advise who’s doing what and the right way to respond to that challenge… will be absolutely crucial.
“To pretend that there isn’t a game involving China particularly in our part of the world is deluding yourself.”
Former Canadian prime minister Stephen Harper said Russia was a “pygmy version” of the old Soviet Union, a declining power with immense problems, and he was confident the West could survive any threat it posed.
However China was a “much more difficult problem” because it was building an alternative model that was proving to have appeal and success internationally.
Harper said the biggest challenge for the Five Eyes was in the cyber realm.
The Five Eyes countries are the US, UK, Australia, Canada and New Zealand.
Five Eyes intelligence agencies share raw intelligence data, sources, methods and analyses, and work closely together.
However “we have far less cooperation than we really need to on [the cyber] level,” Harper said.
Some allies, whom he did not name, have “permitted the penetration of Chinese and other hardware and software into our systems, that causes some of the rest of us to be reluctant to engage in cyber cooperation”.
George Robertson, former Secretary General of NATO and former UK Secretary of State for Defence in the Blair government, said there needed to be less talk about how much countries were spending on defence, and more about whether they were spending it in the right places – such as cyber warfare.
He said anyone with a mobile phone was potentially being listened to by Chinese intelligence – and this was having a big impact on how the Five Eyes services work.

To pretend that there isn’t a game involving China particularly in our part of the world is deluding yourself.
Former Australian PM John Howard

“Somebody in a warehouse near Beijing is quite able to [hear] everything that we say,” he said. “The assumption is that any discussions that take place in rooms that have mobile phones might as well be on the record and that has changed the world of intelligence.”
Harper also addressed what he called the “elephant in the room” – the new attitude of the Donald Trump administration to international cooperation.
The “America First” attitude was likely to last beyond Trump’s presidency, Harper said, and the country was more likely to act in its own interests sometimes at the expense of international systems.
This was “not ideal” but it was something the rest of the world needed to adapt to, he said.
But it would be a “great error” if the US went so far as to end its security alliances, Harper said.
Earlier, Howard spoke on BBC radio in favour of Australia teaming up with the UK after Brexit to put up a new satellite geolocation network.
In May the Financial Times reported the UK hoped to partner with Australia in developing a satellite navigation system to rival the European Union’s €10 billion ($16 billion) Galileo project, itself a proposed alternative to the US military-run GPS.
The EU has said the UK would be barred from using Galileo’s military-grade signal after Brexit.
Whitehall officials told the Financial Timesthat Australia, which has announced plans for a national space agency, had indicated potential interest in a UK project, though it was at an early stage and there had “not yet been any formal contact”.
Howard said such a deal would be a “natural extension to a very close relationship” between the UK and Australia, as the Five Eyes relationship meant there was “trust of a very high order” between the countries on security and intelligence.
Matthew Ford, a lecturer in international relations and expert in defence technology at Sussex University, said the UK relies on Europe and the US for battlefield information that can only be acquired from space.
“It is possible for the UK to build its own space infrastructure but it would be extremely expensive and it poses a number of difficult problems for which the UK currently has no answers,” Ford said.
“Howard’s comments betray an ignorance[about] the current state of Brexit negotiations and consequently feed unhelpful narratives that muddy waters and make the politics of leaving the EU more complicated than necessary. Howard could do the UK a great favour and stay out of British politics.”
Nick Miller is Europe correspondent for The Sydney Morning Herald and The Age
Posted by Conan Doyle at 6:14 PM