Yong Lu, 35, was arrested Saturday in Niagara Falls after allegedly chopping off his pregnant wife's arm and fingers late last week.  (New York Police Department)
A New York City man who allegedly cut off his pregnant wife's arm and escaped Brooklyn was arrested near Niagara Falls on Saturday — as police said he may have been plotting to swim to Canada.
Yong Lu, 35, was taken into custody in the One Niagara building around 7:45 p.m., The Buffalo News reported.
Niagara Falls Police tweeted a photo of Lu getting arrested in a food court. The department credited the New York Police Department and the U.S. Marshals Violent Fugitive Task Force for aiding in the arrest. 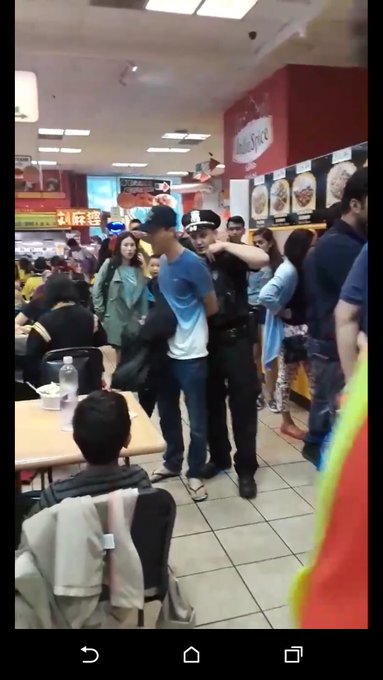 Very proud of the professionalism displayed by one of our newest officers!
This is a text book arrest due to proactive policing during a potentially deadly situation that ended without force and the apprehension of a very dangerous suspect
And all with his NFPD 8 point hat on!

Twitter Ads info and privacy
Lu was wanted for allegedly cutting off his wife's arm and two fingers on her left hand with a steak knife in Sunset Park on Thursday just after noon, according to the New York Post.
Lu's wife, 31-year-old Yang Li, was inside their home waiting for their 7-year-old son to finish school. Lu reportedly became angry and went on a rampage.
BRONX BOY, 15, KILLED IN 'BRUTAL' STABBING, NYPD SAYS; HELP SOUGHT IN ID'ING ALLEGED ATTACKERS
Li was rushed to a hospital, where emergency responders learned of her pregnancy. She was placed into a medically induced coma, and surgeon reportedly reattached her arm.

Yong Lu said nothing Sunday after he was charged for, according to the NYPD, severing his girlfriend's arm earlier this week in Brooklyn. http://ny1ne.ws/zYWEB8

Twitter Ads info and privacy
Lu was wearing a life jacket when he was arrested  — and police believed "he was going to swim across" to Canada, Deputy Marshal Brent Novak told The Buffalo News. 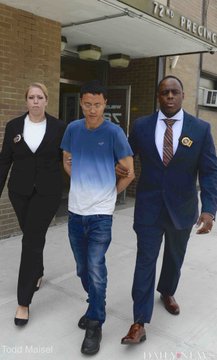 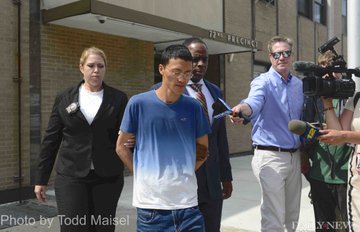 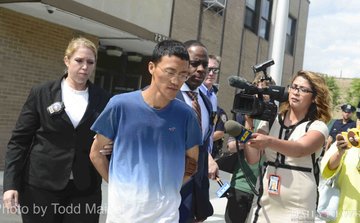 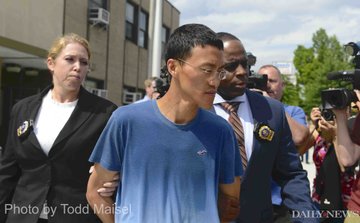 .@NYPD72Pct arrested Yong Lu, 35, after he hacked off wife's arm & fingers last Thursday. Arrested by @NYPDDetectives in Niagra Falls, on vacation. he says nothing to us - blank stare http://www.nydailynews.com/new-york/nyc-crime/ny-metro-brooklyn-man-chopped-wife-arm-arrested-20180624-story.html …

Twitter Ads info and privacy
He also tried to hop on a bus as a stowaway, Novak added. "He talked to a bus driver and asked to ride over to Canada in the luggage compartment," Novak said, but added the bus driver wouldn't let him.
Lu, according to WIVB, was transported back to New York City either late Saturday or early Sunday.
Posted by Conan Doyle at 10:51 AM