Billy Graham: the pastor who went into North Korea +2
Billy Graham presented his book 'Peace with God' to North Korean President Kim Il Sung when they met in Pyongyang in 1992
The staunchly anti-communist Billy Graham had a record of engaging with Communist leaders in Asia as he pursued his global evangelistic mission -- most notably North Korea's Kim Il Sung.
Graham, the influential US pastor who died aged 99 on Wednesday, became one of the first foreign religious leaders to visit the hermit state in 1992, when it was reeling from the collapse of the Soviet bloc.
He had a rare audience with its founder -- presenting him with a copy of his book "Peace with God" -- preached in Pyongyang, and gave a lecture at Kim Il Sung University, the country's most prestigious educational establishment.
The North discourages religion, while Graham for decades during and after the Cold War condemned Communism from the pulpit.
"The Communists are not going to compromise, they are not going to change, their objective is to rule the world," he said in one sermon. "Communism is the greatest challenge the church has ever had to face in modern times."
But both sides had their own motivations for the visit.
Kim was raised under strong Christian influence -- his mother and her relatives were devout believers.
"In light of Kim Il Sung's personal experience with Christianity, it was not awkward for him to meet Graham," Paik Hak-Soon at the Sejong Institute told AFP. +2
Billy Graham's son and successor Franklin Graham has also visited North Korea, on this occasion in 2009 meeting with Kim Yong Dae, vice president of the North Korean people's assembly
Graham conveyed a message from then President George Bush to Kim, in a meeting Pyongyang's state media said took place in "a cordial and friendly atmosphere".
The evangelist later termed the visit "unquestionably, one of the most memorable events of my life", according to the Billy Graham Evangelist Association website.
Afterwards he expressed optimism about the North's future.
"I think there's going to be some changes," he was quoted as telling US newspaper Newsday. "They've lost the support of the Soviet Union. I got the impression they're reaching out toward other nations for some friends."
Instead though, the isolated country accelerated its nuclear weapons drive, prompting the Clinton administration to seriously considering bombing its atomic facilities in 1994 -- when Graham visited again.
That trip paved the way for a crucial visit a few months later by former president Jimmy Carter, who met Kim Il Sung and helped negotiate a deal to defuse the nuclear crisis.
"Through Graham, Kim Il Sung was able to convey a message to Washington that he wanted negotiation and Carter took the cue," said professor Yang Moo-Jin of the University of North Korean Studies.
- Different gods -
Graham visited China in 1988, also at a transformational time for the Asian giant which was undergoing an economic overhaul under Deng Xiaoping´s policy of "opening up".
The pastor, whose wife Ruth was born in China as the daughter of missionaries, declared his trip was part of the process of "building bridges" between United States and China, and also between the churches of the two countries.
He was greeted by Premier Li Peng, who according to news reports at the time said: "We don't have the same God but that doesn´t matter. It doesn´t prevent us from having a good talk together".
But barely a year later the army violent suppressed the Tiananmen Square protests, earning Li the nickname "the Butcher of Beijing".
Graham's visit appeared to do nothing to make the officially atheist Communist regime more tolerant of religious groups, and to this day it remains wary of any organised movements outside its control.
- Juche ideology, Christian dogma -
Just a month after Graham's second visit to North Korea, Kim Il Sung died of a heart attack and was succeeded by his son Kim Jong Il.
Graham himself never went back to the North, although his own son and successor Franklin Graham has done so several times.
"In person, I found President Kim to be a forceful and charismatic leader, and I could understand why he was held in such high esteem by his fellow citizens," Graham said after Kim's death.
"Although he met few Americans, he always expressed the hope for better relations with the United States."
Christianity first found a foothold in Korea only in the 19th century, but the peninsula has since proved rich territory for the faith, with pre-Communist Pyongyang -- where Graham's wife attended a missionary school in the 1930s -- once dubbed the Jerusalem of the East.
Religion is now suppressed in the North, but the South is dotted with churches.
Pastor Choi Kwang, who evangelises among defectors from North Korea in China and in the South, told AFP: "North Korea is a potentially fertile ground for evangelism as North Koreans, insulated from flows of information, are living a simple, hard life."
He added: "The North's Juche ideology is similar to that of Christian dogma, in which the Kims take the place of God." 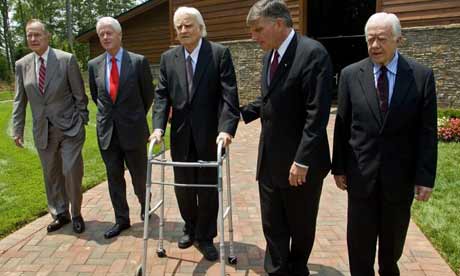 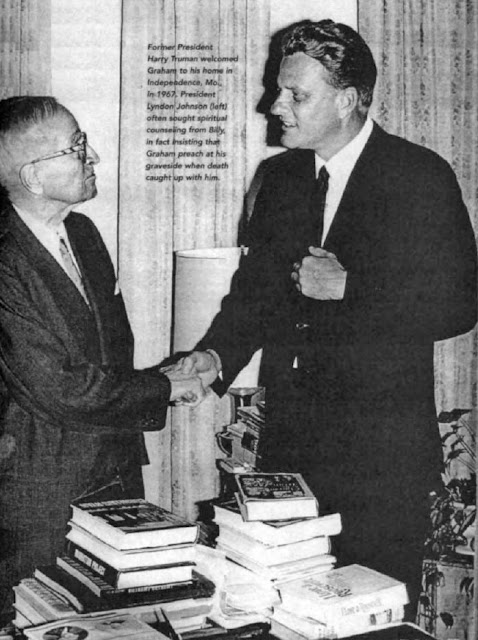 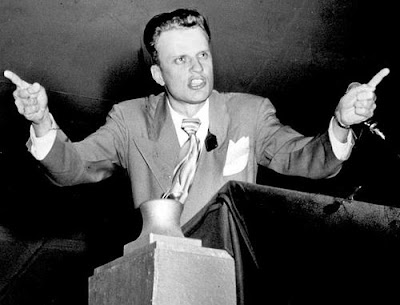 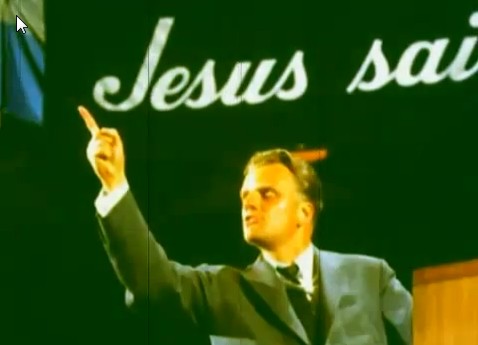 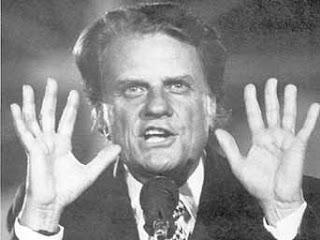 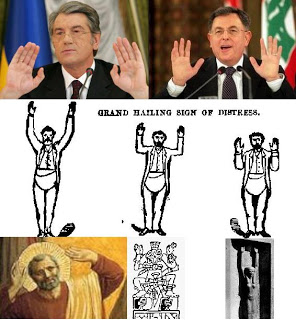 Meeting with Pope John Paul
on the Road to Rome


“I’ve found that my beliefs are essentially
the same as those of orthodox Roman Catholics.”
Billy Graham, McCall's Magazine, Jan. 1978 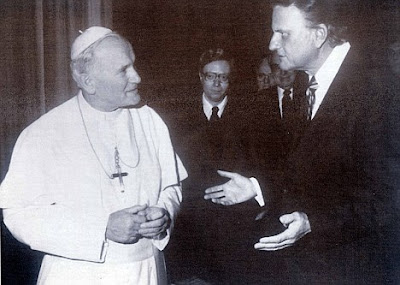 
Your typical Christian wouldn't catch stuff like this because they aren't exposed to it. While stretched over years of ministry, no one catches the signs. If we do see something suspicious, many tend to believe the best in people and blow it off. Even his visit with the pagan Pope.

In June 1989, a Today correspondent quoted Graham as saying:

“There was a pause in the conversation; suddenly the Pope's arm shot out and he grabbed the lapels of my coat, he pulled me forward within inches of his own face. He fixed his eyes on me and said, 'Listen Graham, we are brothers.'" 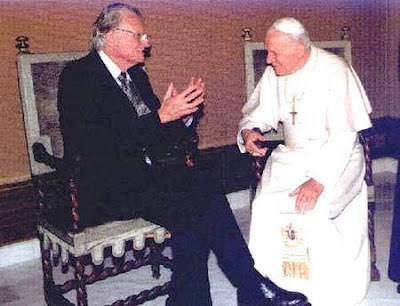 During a visit years later.

He likes the Roman Catholic church so much that he received an honorary degree from Belmont Abbey College in 1967 - a Benedictine institution.

Conclusion
There are several genuine believers that I know who were led to the Lord through the ministry of Rev. Billy Graham. Should this serve as fire insurance for a man who is living a double life, and acting as the forerunner for the one world religion?

Rev. Billy Graham is a puppet of Jesuit Rome, and he's a Luciferian. He has been instrumental in creating the ecumenical Emergent church, and many of the ecumenical Christian colleges and organizations functioning today. Other than his Roman Catholic and New Age beliefs, what are one his other key doctrinal beliefs? The Pre-Tribulation Rapture - a doctrine deliberately created so Christians would believe the Scriptures say that the Lord Jesus Christ will return before Antichrist. Freemasonry, the United Nations, and the Theosophical Society have been working together to usher in the New Age/Masonic Christ - and Rev. Graham has been a willing participant. No matter what he says publicly, or the fact that he's won many to the Lord. Billy Graham is not the man he presents himself to be - and neither are the people who associate with him. 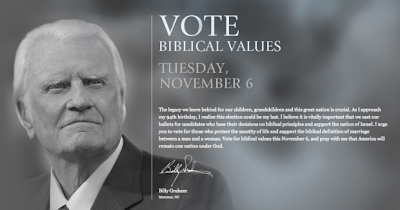 Values voting - a political sham.
“Watch out for false prophets. They come to you in sheep’s clothing, but inwardly they are ferocious wolves." Matthew 7:15

Added July 17:
On the paper coverlet of The History of Freemasonry by Albert Mackey, Billy Graham's name is shown as being a Mason. This book was written by Freemasons, and for Freemasons. Since they are spiritually blind, they apparently saw nothing wrong with placing his name on the cover. But for the Christian, it should send up warning flags, because Masonry is ecumenical and is working toward a one world religion.

(Teaching by Gregory A. Miller.) Billy Graham is nearing the end of his life. But his most damaging work may yet lie ahead. After Billy enters eternity and faces judgment, billions of dollars worth of his materials will be distributed around the world in dozens of languages. There's a movie titled, "Billy: The Early Years," starring Armmie Hammer and Walter Mathau released in 2008.

THE GLORIFICATION OF BILLY GRAHAM HAS BEGUN BEFORE HE IS EVEN PASSED ON. What message will be heard? Billy is an inclusivist (nice term for apostate) and has been from the beginning. He admits it, John R. Rice, Bob Jones Sr., Carl McIntire and others exposed it and Graham's own ministry confirms it. Billy Graham preaches a watered-down Gospel and a false 'Christ' who does not call Roman Catholics, Orthodox or other pagans out of their idolatry. Graham's 'Christ' does not even DESIRE Jews and Muslims to convert! We will listen to Billy's own words from his own mouth, starting in 1949. We will read quotations from his massive propaganda machine. We will read admissions from Billy's own autobiography. Billy Graham sent millions of unwary seekers from a 'sinner's prayer' into the clutches of the Whore of Revelation 17. We must WARN our loved ones and stand against Graham's 'evil empire'. This is a message that all true Bible Believers MUST have as we prepare for the final days of this end time delusion that is sweeping Christendom and has swallowed nearly all of evangelicalism and much of professing fundamentalism already.

You may not want to believe it, but it is happening today and it needs to stop.

Her website is Pedophiles Down Under [3], her twitter @FionaRaeBarnett.
Other related articles on my blog My Story Fiona Barnett Hang on for the Ride [4] andGordon Myers victim of #VIPcsa Australia [5]  Megan Palin wrote the first article to reach corporate mainstream media in Australia Boys had penises cut off, Royal Commission into Institutional Responses to Child Sexual Abuse hears by Megan Palin [6]. The British Daily Mail obviously thinks they can flog more papers with their article [8] but they are well known for turning on the victims weeks or months later.
More information on Fionas story check out this this well written story from Independent Australia on this link [11] followed by Part 2 [12] Also check out Sex lives of Top Australians [13]
Another whistleblower Fiona mentions is aboriginal Gordon Myers, part of the stolen generation, who had to change his name in witness protection, after trying to give evidence to a child  inquiry and due to this lost his driving licence, his truck and therefore his living. Fiona is running a campaign to get him his truck back, which is on facebook Give Gordons Truck back.
Facebook Page Give Gordon’s Truck Back [9] and Gordon Myers Truck crowdfunding [17]
Fiona says that the US /CIA are involved in Child Trafficking, and that she was handed over to John Giddinger in the Jason Project at Pine Gap.  As “Candy Girl” she was raped by Richard Nixon at RAAF Fairbairn, Canberra.  She attended Bohemian Grove and forced to play the hunting children “game” where children were hunted and raped. Billy Graham was there and raped children. She says Walt Disney was a paedophile and she was also abused at Disneyland.