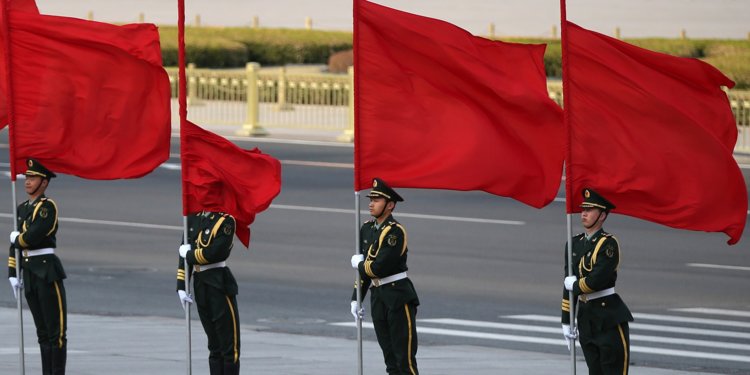 A Chinese Embassy official yelled and made demands of an Australian producer to try and censor an episode of "60 Minutes" that would be critical of China.

Five days before Australia's "60 Minutes" program aired a report on China's dept-trap diplomacy in the Pacific region, the show received an unusually aggressive phone call.
"Take this down and take it to your leaders!" the voice on the other end of the line shouted.
It was the voice of Saixian Cao, the head of media affairs at China's embassy in Canberra. According to a report from "60 Minutes" journalist Charles Wooley, she was yelling at the show's executive producer, Kirsty Thomson, after failing to gain any traction with higher-ups at the network.
"You will listen," Cao reportedly shouted into the phone. "There must be no more misconduct in the future."
Thomson and colleagues had been working on a story about China's growing influence over Pacific nations, by using exorbitant loans for infrastructure projects that leave countries indebted to Beijing, both politically and financially.
The story largely focused on China's projects in the island nation of Vanuatu — where the show's team had also recorded footage of the Chinese embassy — and the official was trying everything to kill the story.
"You will not use that footage," Thomson said Cao demanded.
The incident highlights how China is used to dealing with — and controlling — the media.
Chen Yonglin, a former diplomat at the Chinese Consulate in Sydney who defected in 2005, told Business Insider that this happens frequently with local Chinese language media in Australia and that, ultimately, the incident in Australia would have originated in Beijing.
"The instruction to pressure Channel 9 is from the Ministry of Foreign Affairs. The Ministry obviously believed it is necessary. The representation is to warn Channel 9 and other people not to act like that again," Chen said.
Chen also described how monitoring, and attempting to censor media coverage, is a regular occurrence.
"If it's a local Chinese-language media, the Chinese Embassy/Consulate official should call the Editor-in-Chief directly with serious warning and certain sanctions against this media may follow. For less serious cases, China may request to publish a statement from its Embassy."
Business Insider previously reported how diplomats at a Chinese consulate in Australia invited an advertiser in for an hours-long "tea chat" to convince them to stop funding independent Chinese-language journalism. Another advertiser had Chinese intelligence and security agents physically camp out in his Beijing office to strip funds from critical media.
And last year, two South Korean journalists who followed President Moon Jae-in's trip to Beijing were physically beaten and severely injured by more than a dozen security guards.
Despite the lengths China often goes to influence and outright interfere with foreign media, Chen believes Cao could face repurcussions for crossing a line.
"All Chinese language media are very obedient. Shouting at local Chinese media is not a surprise, but [shouting] at one of the mainstream English media is rare. Saixian Cao could be punished for her behaviour such as being given an internal warning," Chen said.

China gave Vanuatu a loan 360% more expensive than other options


Part of the "60 Minutes" episode highlighted a Chinese-built wharf in Vanuatu that has gained international attention.
Earlier this year reports emerged that China discussed setting up a military presence in Vanuatu, a claim both countries denied but which Australian defense officials reportedlyconfirmed. And the country's newly built Luganville wharf, which was funded by China and seems more suited to navy vessels than cruise ships, would be crucial to this.
The fear is that Vanuatu, like many countries before it, accepted a loan with exorbitant interest rates and may need to hand over the wharf to China if it defaults, a practice called debt-trap diplomacy.
The country can't even afford the cleaning or electricity bill for a $19 million, Chinese-built convention center.
Yet Vanuatu took an $85 million loan from the Export-Import Bank of China for the Luganville wharf, which is topped with a 2% interest rate, that needs to be repaid within 20 years. But a similar wharf project in Port Vila, which was funded with a Japanese loan only required a 0.55% interest rate and gave the country twice as long to repay it.
Business Insider contacted Foreign Minister Ralph Regenvanu with questions about these loans last week but has not yet received a response.
When Sri Lanka defaulted on its loan for a Chinese-built port, it gave state-owned China Merchants Group a 99-year lease which experts believe was a strategic acquisition in the region.

China expects supporting votes at the UN in return


Not only are there concerns that China is trying buy access to facilities and sea routes throughout the Pacific, Vanuatu's foreign minister confirmed Beijing's influx of cash has very, and immediate, global consequences.
Asked by "60 Minutes" whether he thinks China is trying to buy votes at the UN, Regenvanu answered in the affirmative.

"What so you think if they can pump money in here, they'll get support at the UN?" the reporter asked.
"Yes," Regenvanu answered.
"I'm sorry, that's bribery."
"Uh, maybe, that's diplomacy," Regenvanu said. "Australia gives us a lot of money and expects us to vote for them in certain things and we do. This is the give-and-take of international diplomacy."

Australia has been trying to counter China's attempts at foreign interference both locally and in the Pacific, with new and expanded laws currently before parliament.
Last month, an Australian MP and chair of parliament's intelligence and security committee publicly identified a Chinese-born, Australian billionaire and political donor as having allegedly funded a $200,000 bribe to a former UN General Assembly president in order to advance private Chinese business interests.
Posted by Conan Doyle at 1:46 PM