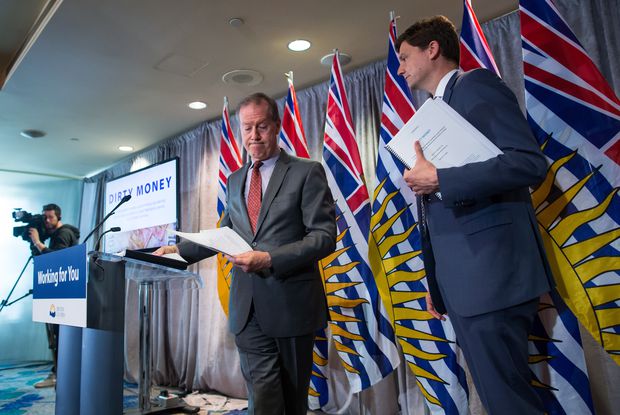 Peter German, left, former deputy commissioner of the RCMP, and B.C. Attorney-General David Eby attend a news conference where they released German's review of anti-money laundering practices in the province, in Vancouver, on June 27, 2018.

British Columbia’s dysfunctional regulatory regime for casinos has enabled large-scale transnational money laundering by organized crime that is tied to the deadly trade in opioids, says a report by a former deputy commissioner of both the RCMP and Correctional Service Canada.
And the so-called Vancouver model of money laundering, which took advantage of quarrelling government agencies that limited oversight, threatens to seep into other sectors of the economy, especially B.C.’s overheated real estate market, Peter German warns.
“What is most troubling,” Mr. German wrote, “is the degree of sophistication demonstrated by criminal syndicates which worked for many years in unison, across continents, to target B.C. casinos.”
Explainer: How Chinese organized crime uses B.C. casinos to launder money
Investigation: B.C. vows crackdown after Globe investigation reveals money-laundering scheme
Mr. German, who was given the task of investigating money laundering in casinos by B.C. Attorney-General David Eby, found criminal organizations from China that have been using Vancouver-area casinos as “laundromats” for illicit money, exploiting gaps left wide open as different agencies responsible for gambling and regulation waged “internecine” turf wars.
“I can say now with absolute certainty that criminal money laundering is taking place in B.C. casinos and it has to stop,” Mr. Eby told reporters on Wednesday as he released the report.
“Thanks to Dr. Peter German’s work, I can tell you it is tied to the opioid crisis that has taken the lives of thousands of Canadian citizens from their families. It’s linked to the real estate market and housing prices that have made life unaffordable for British Columbians.”
In his report, Mr. German called for further investigation into other vulnerable areas of the economy, saying a crackdown on casinos will send criminals looking for new avenues to move cash, particularly in real estate, luxury cars and horse racing.
“It should be no surprise that organized crime will move to another sector or methodology. This may be real estate, luxury goods, counterfeit products, or many other enterprises. The only criteria is that the new landing spot be lucrative,” Mr. German wrote.
Real estate is a prime target as it is the core of B.C.’s economy today, responsible for an estimated one-third of economic activity. In February, a Globe and Mail investigation revealed how 17 local residents, most associated with drug trafficking, were effectively parking millions of dollars in Vancouver-area real estate.
At a news conference in Vancouver, Mr. Eby released video surveillance clips showing casino patrons trading in plastic bags of neatly bundled cash for gambling chips. Against that vivid footage, he promised a high-profile fight against money laundering by his NDP government.
Opposition BC Liberal MLA Jas Johal accused Mr. Eby of sensationalizing the issue. He conceded that the former Liberal government could have done more while in power, but said the problem is now owned by the NDP.
The Attorney-General said his government is immediately implementing more than a fifth of the 48 recommendations in Mr. German’s report and he is establishing a governance body to do the “difficult but important work” at bringing all aspects of government to take action on the remaining recommendations.
B.C.’s current regulatory model is unique: The Crown-owned BC Lottery Corp. is responsible for maintaining and growing the business of gambling, with private gambling operators acting as franchises. The regulatory oversight is provided by the Gaming Policy & Enforcement Branch and Mr. German said the two arms of government have been locked in conflict for years, leaving frustrated casino operators caught in the middle as the agencies expended “mental energy crapping on each other.”
While the agencies bickered about the source of mounds of cash that were entering casinos in the Lower Mainland, organized crime was honing what has been dubbed “the Vancouver model” of obscuring the source of their profit by running them through legitimate financial institutions.
The tactics that became internationally associated with Vancouver casinos involves high-limit gamblers obtaining money at a discount from an intermediary, which they then used to gamble in legal casinos, leaving with now-untraceable winnings and residual chips. The amount of money laundered through Lower Mainland casinos is unknown, although Mr. German said that throughout a “decade of dirty money,” the amount was well in excess of $100-million.
Mr. German is recommending a new, independent regulatory agency to replace the current system, as well as a designated police force and specialized prosecutors.
Peter Goudron, executive director of the BC Gaming Industry Association, welcomed the German report, saying his members were reporting its concerns, “but maybe no one was listening.”
He said the casinos have to rely on government agencies to do their jobs. “We don’t have investigatory capability or the ability to deeply dig into these things. We have to rely on other parties to do that work, and it appears that’s one of the gaps that occurred.”
Mr. German told a news conference in Vancouver on Wednesday that he was gratified to hear that the government had accepted his 48 recommendations and warned against half measures in proceeding with his agenda for action.
“In my opinion, partial implementation of the recommendations would be a mistake. There cannot be a weak link or history will repeat itself.”
RELATED
B.C. has failed to prevent money laundering through casinos: Attorney-General
Globe investigation into money laundering in B.C. real estate will lead to new rules, AG says
B.C. attorney-general decries fentanyl link in Globe’s money-laundering investigation
Posted by Conan Doyle at 11:12 PM