Chinese banks are big. Too big?

Chinese banks are big. Too big? 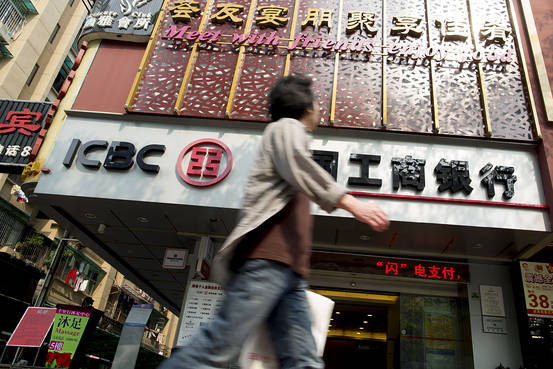 Lots of things are bigger in China: the population, the IPOs, the electrical dams, the Starbucks, even the mosquitos. Turns out the banks are bigger too.
The three largest banks in the world are all Chinese. The country's banking sector hit $35 trillion early this year — roughly 3.1 times the size of China's annual GDP. It overtook the eurozone's banking assets of $31 trillion — 2.8 times the eurozone's GDP — in late 2016. And it leapfrogged America's banks — $16 trillion in assets — back in 2010.
How did that happen? And should the rest of the world be worried about its gargantuan scale?
A lot of Western financial reporting has been nervously eyeing China's banks for several years now. When we talk about bank assets, a lot of that is loans made to households and companies. And China's banks built up their assets by lending like crazy over the last decade. If you add up the country's household, corporate, and government debt, the ratio of the total compared to GDP is roughly equivalent to America or Britain. But the speed with which China arrived at this point is kind of astounding.

(Graph courtesy of The Chinese banking system: Much more than a domestic giant, by Eugenio Cerutti and Haonan Zhou, February 2018.)
Richard Vague, a former bank CEO and the chair of The Governor's Woods Foundation, told The Week that, just since 2008, China has seen "the largest growth in private debt in the history of the world."
You couldn't blame anyone for wondering if that pace of lending is sustainable.
But this is also where we really have to attend to the differences between China's weird state-run hybrid capitalism, and the much more hands-off free market approach of America and the West.
Both the Chinese government and the U.S. federal government control the national currency. The banks in both countries lend in that currency. Both governments have a central banking system to backstop the rest of the banks and serve as a lender of last resort.
The difference is that America's Federal Reserve system and related institutions at least try to operate by "free market" principles and avoid moral hazard. China's institutions, by contrast, are much friendlier to central planning. In fact, most of China's banks are themselves owned by the state. So the Chinese government can and does intervene to prevent banking crises to a completely different degree. Vague said Beijing will "come in and fix the profitability, fix the capital, fix the bad debt, of the state-owned banks ... by any number of means that you and I would not see happen in the United States."
American banks are privately owned, so they make lending decisions based on whatever they think will bring in a profit. But China's banks do a lot of lending based on the government's preferences and long-term plans for the Chinese economy. Ninety-seven percent of assets held by Chinese banks are domestic — i.e. loans to other entities in China. In America and Britain, the corporate, household, and government sectors split the debt load roughly equally. But in China, about two-thirds of all debt is owed just by the corporations. (Which are also largely state-owned.)
In other words, much of this huge lending burst has been a very roundabout form of government-financed industrial policy. "China has committed itself to a high level of growth. And growth, very simply, is contingent upon financing," as Vague put it.
China's banks still need to make some effort to run a profit and keep their finances balanced, just to function as financial institutions and do the everyday things banks do. And the government may well let smaller and privately-owned firms at the periphery of China's financial sector fail.
But because the Chinese government owns most of the banks, and it prints the currency, it can technically keep those banks alive and lending forever.
This really gets us down to economic bedrock.
It may sound weird to say that China's banks will never collapse, no matter how absurd their lending positions get. But banking systems are just about the flow of money. The real economy — the actual businesses and goods and services and construction projects and all the other efforts to produce real wealth — is a separate matter. That's where things could go badly awry for China.
The basic idea behind capitalism is that private investors seeking profit make better decisions about how to use real-world resources than government direction. China's basically trying to prove that conceit wrong.
As Vague pointed out, political and labor unrest is a huge problem in China. The government is willing to use crackdowns and mass political arrests to stop it, but obviously that just risks further enraging the populace. Much better to keep economic growth high, spread the proceeds to the citizenry, and keep everyone happy. If the government fails to properly manage its economy, there won't be any dramatic 2008-style banking collapse. It's GDP growth will just slow way down, and incomes will stagnate. And the Chinese citizenry will get very restless.
This could also be a problem for the rest of the world. The other two big global economies are America and the eurozone, and neither has done a great job keeping its economic growth up. If China slumps, there's no one left to keep the global economy from stagnating. More than that, a mismanagement of China's economy will inevitably mean overcapacity: building too many goods for China's own citizens to absorb with their own incomes. That will lead to more cheap Chinese exports being dumped on the global economy, killing domestic industries in other countries, and driving up their inequality and their political unrest.
Vague noted there's also a number of smaller Asian and Pacific economies that have built up a lot of debt, and aren't as good as China at managing their banking systems. But they're also deeply integrated with China's economy and dependent upon its continued growth. If China stumbles, "they may have good old fashioned bank failures in a way that China probably will be able to avoid," Vague said.
China may well keep all these balls in the air and come out the other side okay. And if it does, it will deliver a severe ideological blow to American-style capitalism.
But if it doesn't, the crisis will be slow and political rather than fast and financial. And it probably won't stay contained in China.
Posted by Conan Doyle at 7:42 AM