The operation on Jan. 20, 21, 25 and Feb. 1 and 2, used, for the first time, the CCG hovercraft Moytel, which helped enforcement crews pull in more than double the 136 illegal traps netted in a three day operation last winter. 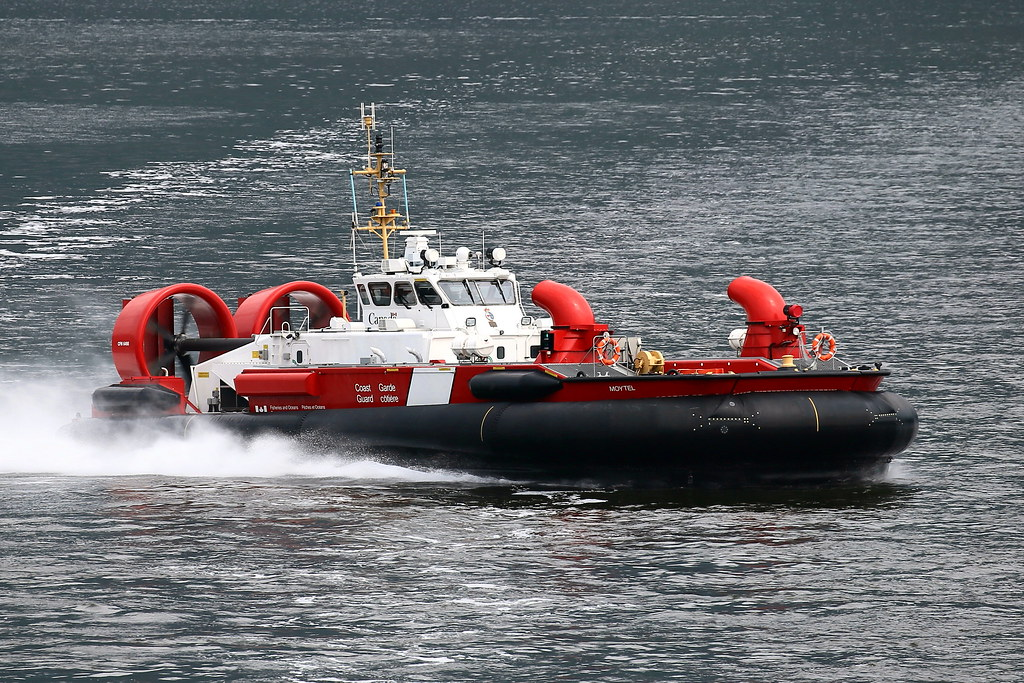 Fisheries officers are now investigating the seized gear to try to identify perpetrators and say charges may follow.

Boundary Bay straddles the Canada-U.S. border, but on the B.C. side, the commercial crab fishery closed in November.

Art Demsky, field supervisor with DFO's conservation and protection unit, said poachers set traps without the required identifiers or locator floats, and then use GPS coordinates to find them later.

"Their intent is to hide these traps," he said. "We're pretty sure this catch gets laundered into the commercial marketplace."

According to Demsky, higher prices driven by demand for crab at Christmas and Chinese New Year is motivation for illegal crabbers.

He said they pose a major conservation concern by taking undersized crab or females that haven't had a chance to reproduce.

"This is the time of year they start to spawn. We don't want harvests on smaller crab or female crab, and certainly not crab that are spawning or carrying eggs," said Demsky. "That fishery is closed for a reason."

Because illegal traps have no floats, DFO crews use a grappling hook or "dragger" to locate and snag the "string" or groundline that connects the traps.

The gear was then pulled to the surface using the large crane and winch on the Coast Guard hovercraft.

Demsky said they were surprised to pull up one monster string that was 1.6 kilometres in length with 21 traps attached. Everything caught in the traps was put back in the ocean.

A large quantity of ghost gear — abandoned lines and traps that pose a threat to fish and invertebrates — was also recovered.

According to DFO, in the past five years similar wintertime operations have yielded:

Earlier this month, Andrew Newman was dismayed to witness two people rip the claws off undersized crabs in White Rock, B.C. and toss them back into the ocean.

Newman, the owner of White Rock Sea Tours and Whale Watching, described the scene as an act of "greed and cruelty" and called authorities.

He later posted a video of the RCMP bust that resulted in fines for two people accused of removing the meaty claws from undersized and female crabs.

The Department of Fisheries and Oceans says Hsin Chan and Chun Li were charged and ticketed under the federal Fisheries Act for fishing without a licence and harvesting undersized Dungeness crab on Sept. 7.

Fisheries officials did not have statistics on poaching in B.C., but a biologist at Vancouver Island University said crab poaching is a problem in the Lower Mainland.

Stefanie Duff, chair of the fisheries and aquaculture program at the University of Vancouver Island, said she has noticed a number crabs without their claws, especially in intertidal areas where recreational fishermen often pitch their traps.

Poachers rip the claws off crabs because they contain the most succulent — and therefore most valuable — part of the crab. Poachers then toss the rest of the body back in the water.

"It's a bloodbath, basically," Duff  said, adding that removing a crab's claws is akin to cutting off a human's hands; it reduces the animal's ability to eat, defend itself, move effectively and almost ensures a slow death.

It's illegal in B.C. to retain any part of a crab without the body. It is also illegal to keep female crabs which can produce between 20,000 and 80,000 offspring in a lifetime, said Duff.

Because crabs don't have blood vessels the way mammals do, they are likely to bleed to death if an appendage is torn off carelessly, Duff said.

It's difficult to determine how much crab is removed by recreational fishers in the province. However, a 2005 survey estimated the legal recreational harvesting accounted for about 368 tonnes, or seven per cent of the total harvest.

Crab poaching is a concern because stocks in the Lower Mainland have been declining since 2010, according to Jason Dunham, a biologist who has helped conduct the surveys for a number of years.

The cause of the decline is unknown, but the ministry said it could be combination of environmental conditions, warming waters, poaching and other issues.

Because of the decline, some of the province's 221 commercial crab licensees have moved their fleets to other regions, worried about harvesting opportunities around Metro Vancouver, according to Dunham.

B.C.'s commercial crab fishery accounted for 31 per cent of the value of the province's wild shellfish products in 2014 and averaged a value of $46 million in harvest each year from 2013 to 2015.

It's also an important food, social and ceremonial fishery for First Nations.

Newman said he used to see fisheries officers at the pier in White Rock, but they haven't been around lately.

Ministry staff said that's likely because of record-low salmon returns, which have kept the few officers in the region very busy.

"I would say our resources are definitely stretched and we definitely do need more officers," said Demsky who added that the Lower Mainland employs 27 officers.

One woman and one man are facing charges under the federal Fisheries Act, after police were alerted to people breaking the claws off of live crabs and throwing them back into the water off the White Rock pier last week.

Const. Chantal Sears confirmed Tuesday that charges – fishing without a tidal licence, catch and retain undersized red rock crab, and catch and retain Dungeness crab – were sworn that afternoon against a White Rock woman and a man from Belgium.