Are We Crazy During Covid! Canada opens doors wider to immigrants from Hong Kong as China clamps down

Canada’s immigration minister is opening the doors to people in Hong Kong, with an aim to attract students and recent graduates, but potentially leaving out many vulnerable people in the former British colony that is coming under increasing Chinese pressure.

The Chinese government imposed a new national security law on Hong Kong earlier this year in response to growing democracy protests. The law makes it a crime to advocate for secession or independence and allows for sweeping surveillance. It also allows for people charged with these crimes to be moved to China for trials that could occur behind closed doors.

Earlier this week four pro-democracy legislators — two of whom were former Canadian citizens — were expelled from Hong Kong’s legislature causing others to resign and leaving the legislature without any opposition. Canada condemned that move in a statement as did several other Western nations.

“This action clearly demonstrates a concerning disregard for Hong Kong’s Basic Law and the high degree of autonomy promised for Hong Kong under the ‘one country, two systems’ framework,” said Foreign Affairs minister François-Philippe Champagne.“We are deeply disappointed that China has chosen to break its international obligations.”

The national security law has been denounced around the world as an assault on the city’s freedoms and an erosion of the “one country, two systems” approach that was supposed to govern Hong Kong after its transfer from Britain.

Immigration Minister Marco Mendicino announced new paths for students and recent graduates to apply for work permits in Canada. He also waived fees for students already here to reapply and made it clear that a violation of the new national security law would not be grounds for denying entry on an asylum claim.

“No one will be disqualified from making a legitimate asylum claim in Canada by sole virtue of having been charged under the new national security law,” he said.

Many of the protestors in Hong Kong over the last year were not charged under the national security legislation, but were accused of starting riots. Mendocino would not directly answer if they also would be allowed to make asylum claims, but said the government would not deny claims if the person was charged with a crime that would not be recognized under Canadian law.

Mendocino said Canada is deeply concerned about the situation in Hong Kong and was opening more immigration pathways as a result.

“We continue to watch the situation with grave concern in Hong Kong. And as I said in my remarks, today’s announcement is set against that backdrop.”

There are 300,000 Ethnic Chinese Canadians living in Hong Kong and Mendocino said any travel documents they need will be expedited and their immediate family members will be able to travel to Canada in spite of COVID-19 restrictions.

Last month, Mendocino announced an increase in Canada’s immigration targets aiming to bring in more than 1.2 million newcomers  [focusing on  China] over the next three years. He said there is a tremendous opportunity for Canada in potential immigrants from Hong Kong and they can help the country deal with [labour shortages?] in health care and tech sectors.

“As our health-care workers fight the second wave, our government is ensuring that we have the people we need for a second shift,” he said. “We will continue to look for highly skilled people from around the world, and that includes places like Hong Kong.” 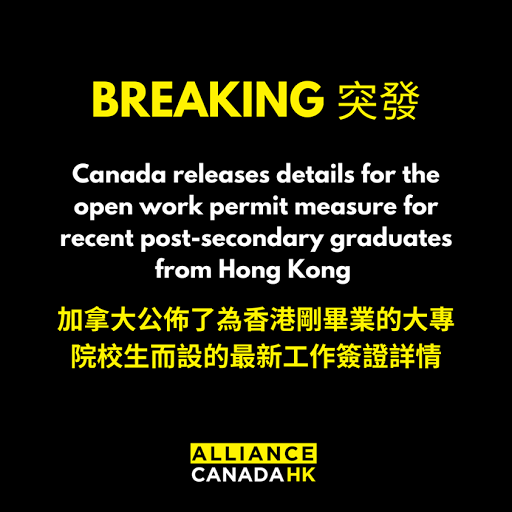 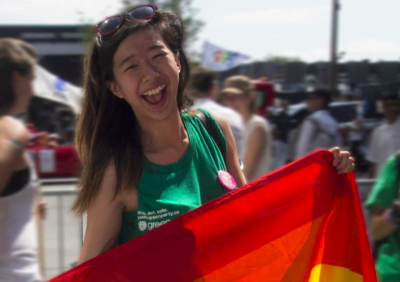 Wong said she would like to see people able to make their Canadian asylum claim from Hong Kong, because it can be difficult for anyone who took part in protest activities to leave.

She said surveys her group has done show many people living in Hong Kong would be interested in calling Canada home, second only to Taiwan and ahead of countries like Britain and Australia.

China’s ambassador to Canada, Cong Peiwu, suggested recently the 300,000 Canadians in Hong Kong could be at risk if Canada granted asylum to people fleeing the country.

Wong said she feels that is empty sabre rattling, but Canada should expect a response from Beijing over today’s announcement.

“I don’t think the Chinese Communist Party will be taking any retaliatory measures against Canadians in Hong Kong,” she said.

She said even if China takes a tough stance, Canada should keep opening its doors.

“We cannot let an authoritarian regime that has no regard for human life to dictate how Canada wants to treat Hong Kongers.”

Earlier Thursday, members of the House of Commons committee looking into the plight of ethnic Muslim Uighurs in China’s Xinjiang province were unequivocal in levelling genocide against China’s ruling Communist party.

The panel rendered its genocide finding after hearing harrowing testimony from survivors of China’s imprisonment of Uighur Muslims. They shared accounts of their mass incarceration, rape and forced sterilization of women, and mass surveillance.

Critics say China has detained as many as a million Uighurs and members of other Muslim groups in what amount to mass prisons, where they can be re-educated.

“The subcommittee is persuaded that the actions of the Chinese Communist Party constitute genocide, as laid out in the Genocide Convention,” said Liberal MP Peter Fonseca, the committee chair.

“In particular, the subcommittee would like to thank the Uighur witnesses that provided evidence at great risk to themselves and their families living in Xinjiang.”

The subcommittee’s report will eventually wend its way up to the full Commons committee on foreign affairs and international development before it makes its way to the government for a response.