Scott Morrison has downplayed the arrival of three warships in Sydney Harbour a day before the 30th anniversary of the Tiananmen Square massacre, saying his government approved the visit.
The vessels, with 700 personnel aboard, docked at Garden Island on Monday in a dramatic display of Chinese naval power.
The Prime Minister said the arrival of three Chinese warships into Sydney Harbour was a “reciprocal visit” and the timing of the visit should not be the subject of “over-analysis”. 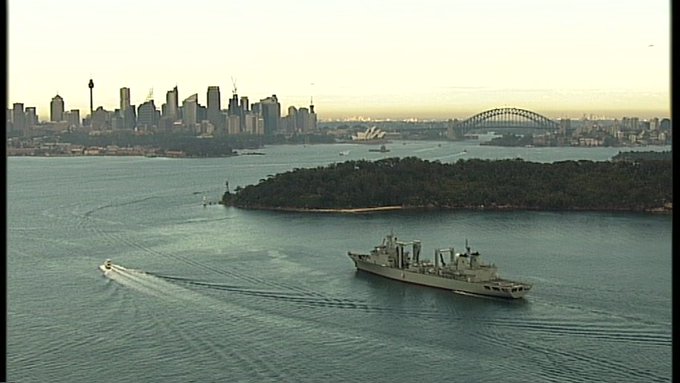 The three ships arrived at Garden Island as the Prime Minister conducts his first post-election trip to the Pacific and on the 30th anniversary of the Tiananmen Square Massacre.
“We have known about that for some time. This was an arrangement, a reciprocal visit because Australian naval vessels have visited China,” Mr Morrison said in the Solomon Islands today.
“This was a program of a reciprocal visit. They were returning after a counter drug trafficking operation in the Middle East. 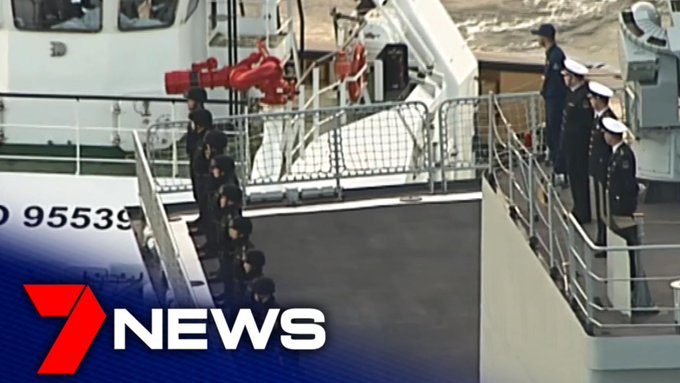 46 people are talking about this
Twitter Ads info and privacy
“That is a further demonstration of the relationship that we have and this had been in train for some time. It may have been a surprise to others but it certainly wasn’t a surprise to the Government.
“I think any reading into timing could be subject to a bit of over-analysis.”
While the Australian public was apparetntly taken by surprise, videos emerging on Chinese social media platform WeChat show that some members of local Chinese-Australian community greeted the visiting ships with a well-prepared ceremony.
Waving Australian and Chinese national flags and holding a banner printed with the message “Warmly welcome Chinese Navy frigate fleet visiting Australia” , dozens of Chinese Australians lined the harbour where the ships were docked this morning chanting “welcome!”
Another WeChat post published last night referred to the pending arrival of the Chinese ships.
“Tomorrow morning, the Chinese Australian community will welcome magnificent People’s Liberation Army Navy soldiers conducting a friendly visiting to Sydney at the Garden Island navy base,” the post from local Pro-China Chinese language media AUST333 read.
The Australian can reveal that members from pro-China groups including the Australian Council for the Promotion of the Peaceful Reunification of China (ACPPRC) could be seen among the welcoming crowd. This group is often believed to have advanced information and priority access to China’s official events in Australia, as do Chinese state media’s bureau in Australia.
Videos and images show that members of the group later were invited onboard of the “Luomahu” replenishment ship.
The ships were part of an extended deployment which recently conducted anti-piracy operations in the Gulf of Aden.
It’s understood the request was made “a few weeks ago” but was not approved until last week, after the Morrison cabinet had been sworn in. 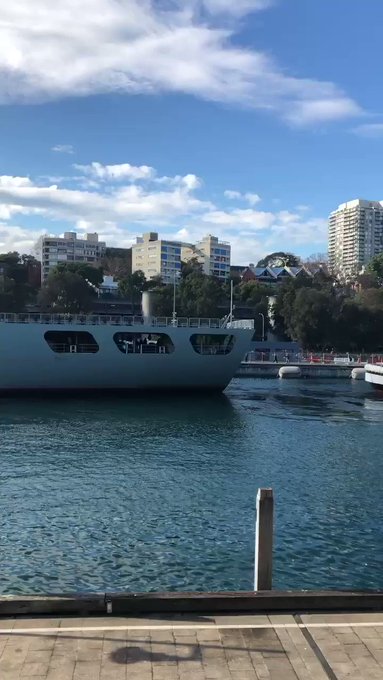 Took a minute to work out it is the Chinese Navy 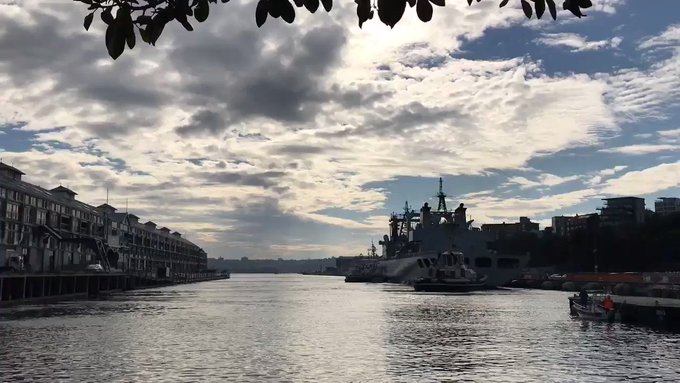 Chinese warship docked at Garden Island. Will be here for the rest of the week. @9NewsSyd @9NewsAUS


The PLA-N taskforce comprises a frigate, an auxiliary replenishment ship, and a landing helicopter dock, with about 700 personnel aboard.
The PLA-Navy last visited Sydney for a similar visit in 2017.
The visit comes days after Australian Navy pilots were the target of laser attacks over the South China Sea and Australian ships were tailed by Chinese vessels.
Helicopters from the HMAS Canberra were forced to land as a precaution last week after they were hit by lasers from fishing vessels.
The same Australian ship was followed by a Chinese warship and Defence confirmed to ABC News last Monday that the HMAS Canberra had a “professional” and “friendly” interaction with the People’s Liberation Army during Indo-Pacific Endeavour 2019, an ADF regional engagement mission.
The Chinese Navy has a large maritime militia presence in the South China Sea, including fishing boats, to carry out operations just short of combat.
Posted by Conan Doyle at 9:05 PM