Chinese crooks can feel safe under Trudeau it seems, ISIS can! 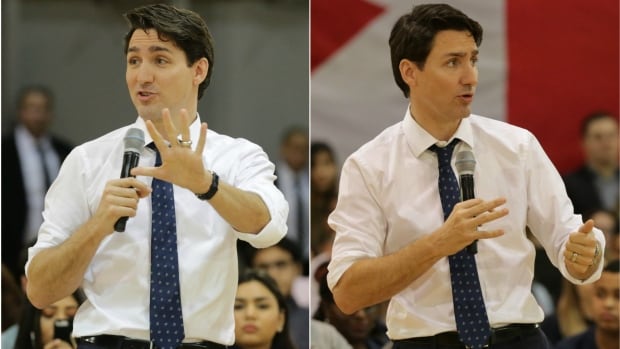 Prime Minister Justin Trudeau told a Hamilton town hall Wednesday that despite concerns over returning ISIS fighters, Canadians were safe in their country and could rely on the security and intelligence services to keep them that way.
"Nobody searched anybody as they came through the door here," said one questioner. "Nobody was patted down, no metal detectors were passed over anyone. Anyone could have brought anything in here.
"You say that you're concerned and you have the best interests of Canadian security at heart. You can't even run half decent security at this event here. How are you going to make sure we're all safe?"
Trudeau joked that while he did work as a bouncer, he was no expert in security and that he takes his advice from his security experts, including the RCMP.
"On the issues of foreign travellers, I take advice from our intelligence agencies and our security agencies who are very, very alert to the challenges of returning  … from the Middle East.
"We are very alert and responsible for keeping Canadians safe, keeping our communities safe. It's something we will never compromise on. I can assure you sir you are very safe here in this room right now."
When Trudeau was asked what he hoped would be his legacy as prime minister, he said that unlike his father who had specific ideas around the Constitution, the Charter of Rights and Freedoms and multiculturalism, he wanted to empower individual Canadians.
"As I think about my potential, eventual, legacy, I hope that it's around having empowered Canadians as individuals to be more active, engaged citizens," he said.
"If as a country … we can do a better job of making sure that everyone has the tools and opportunities to shape the world around them, then I think that would be a pretty good legacy."

The plight of Abdoul Abdi

Trudeau also told a Hamilton town hall that Canada is "not perfect" and Canadians must work hard to improve the country and its impact on the world.
"Never forget we're not perfect, far from it. That every day we have to work hard to reflect on how we can and must do better, how we can and must be more compassionate, more understanding," Trudeau said.
The statement came after an attendee at the event at McMaster University asked Trudeau about the plight of Abdoul Abdi, who is facing deportation to Somalia. 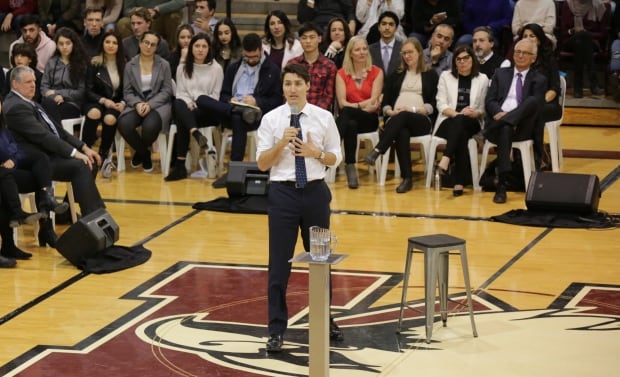 Trudeau took questions for more than an hour from a crowd that welcomed him warmly, even giving the prime minister a standing ovation near the end of the session. (David Donnelly/CBC)
Abdi came came to Nova Scotia at the age of six, along with his aunts and sister, but spent much of his childhood in the care of the province and shuffled between foster homes.
Nova Scotia's Department of Community Services never applied for Abdi, now 23, to become a Canadian citizen, and he's now facing possible deportation because of his criminal past.
Trudeau assured the questioner his immigration minister, Ahmed Hussain, who also came to Canada as a Somali refugee, could be trusted to make the right decision in Abdi's case.

Trudeau is taking questions at the second of six town hall events being held across parts of the country this month. CBCNews.ca is carrying the event live.
In the second of a series of scheduled town halls across the country this month, Trudeau was also asked about legalizing other drugs, beyond his government's plan to legalize pot this summer. He said there are no plans on the horizon to legalize any other illicit drugs.
After Hamilton, Trudeau will travel to London Ont. on Thursday where the federal cabinet is holding its winter retreat to hold his third town hall. Trudeau will then take a break before holding another session in Quebec City on Jan. 18.
Later in the month, he heads to Winnipeg and Edmonton, but no specific dates for those events have been released.


The Prime Minister's Office said that it is not vetting the questions before they are asked.
Posted by Conan Doyle at 12:32 PM