A prominent Chinese billionaire political donor has been stripped of his Australian residency and barred from returning to the country after his Communist Party ties came under scrutiny, local media reported on Wednesday.
Officials in

Australia
denied Sydney resident Huang Xiangmo a passport, rejecting his application to become an Australian citizen and cancelling his permanent residency, leaving him stranded in Beijing, the Sydney Morning Herald and The Age newspapers reported.
Huang, who has been at the centre of

a spate of political interference concerns
, has donated millions to Australia’s two main political parties and been photographed with key figures including former prime minister Malcolm Turnbull and opposition leader Bill Shorten.
But he has come under scrutiny for alleged links to the United Front Work Department – a Chinese Communist Party-linked body accused of neutralising opposition and buying political influence around the world. 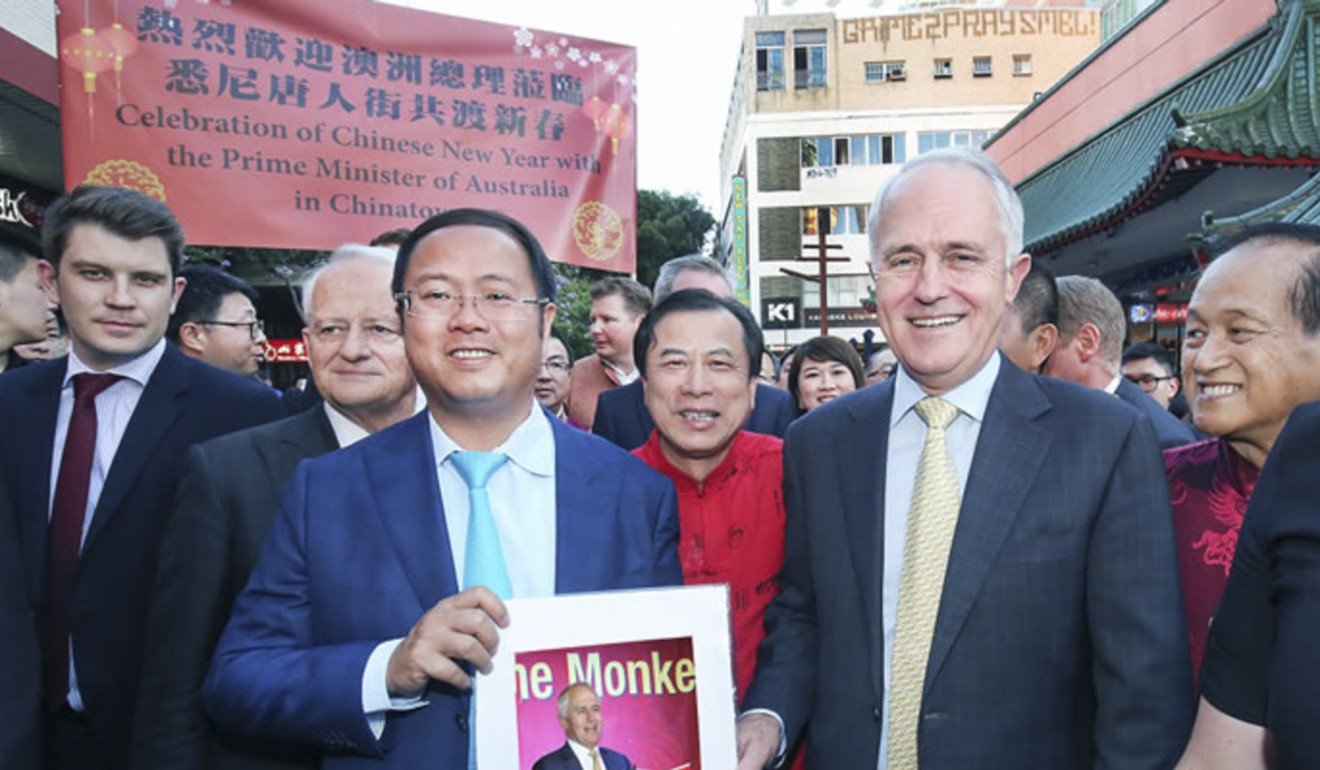 Huang Xiangmo in 2016 with then Australian prime minister Malcolm Turnbull. Photo: Handout
Share:
Chinese analysts said the case reflected deep suspicions about the Chinese Communist Party both in Australia and globally.
“In general, this type of problem will emerge again and again, since it has to do with the ruling party’s ideology,” Pang Zhongying, a professor of international relations at the Ocean University of China in Qingdao, said.
“Many major Chinese business people are party members, and as their status is being emphasised domestically, there will be growing tensions abroad.”

Why China’s richest flock to Australia, even if they’re not always welcome

The trend will make Chinese businessmen uneasy and worried that they will face greater scrutiny in Australia, Pang added.
John Lee, a professor at the US studies centre at the University of Sydney, said Australia would “no longer be able to tolerate undue interference and covert influence by foreign entities in our institutions and decision-making processes”.
He continued: “It is also further evidence that the Australian government is prepared to absorb Beijing’s displeasure on this issue. 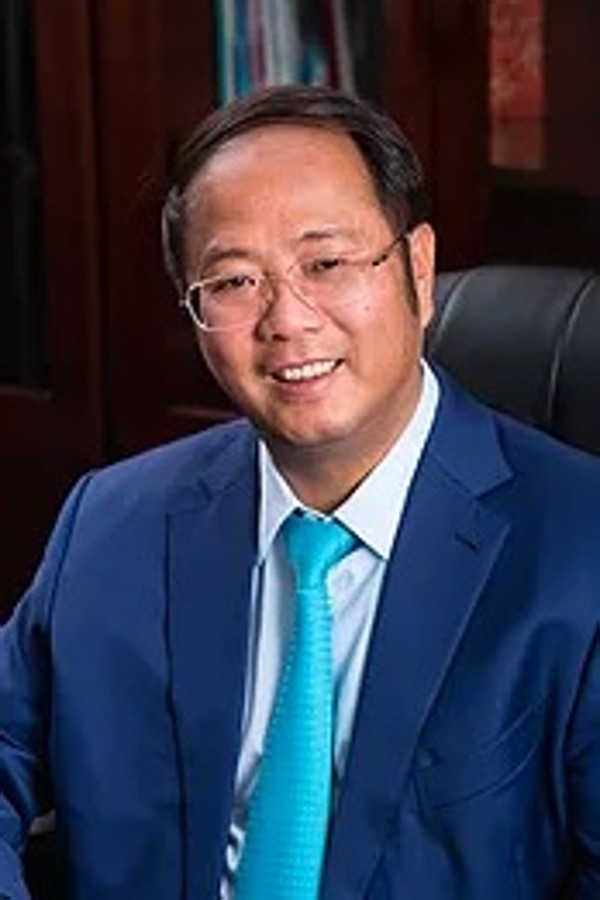 Australia has rejected Huang Xiangmo’s application for a passport. Photo: Yuhu
Share:
“There is no doubt the Chinese Communist Party has exploited Australian complacency about the former’s attempts to exercise undue interference and covert influence in Australian institutions and decision-making processes.”
Asked about Huang, Australian Prime Minister Scott Morrison said he would not comment on a “sensitive matter”.
“The government has always acted consistent with the advice that we receive and that’s what has happened on this occasion,” he said.
Asked later about money that Huang had donated, Morrison referred to the law introduced to ban foreign donations. “The actions we’ve been taking in relation to this gentleman, that’s based on information that exists today.” He did not elaborate.
Quoting unnamed sources, the Sydney Morning Herald said Huang had his application for an Australian passport blocked on “character grounds” and concerns over the “reliability” of information he had supplied in interviews.
Huang, who founded the Chinese property developer Yuhu, was not available for comment. The newspaper said he went to Thailand last month and it was not clear where he was on Wednesday.
Meanwhile, Foreign Minister Marise Payne played down suggestions that the decision to strip Huang of his residency could poison relations between Canberra and Beijing.

The countries’ economies are deeply intertwined, but conflicting political systems and China’s increasingly strong-arm tactics in the Pacific region have made cooperation more difficult.
“I don’t expect it to be the subject of a bilateral discussion. These are matters that occur from time to time,” she told the Australian Broadcasting Corporation when asked about the Huang case. 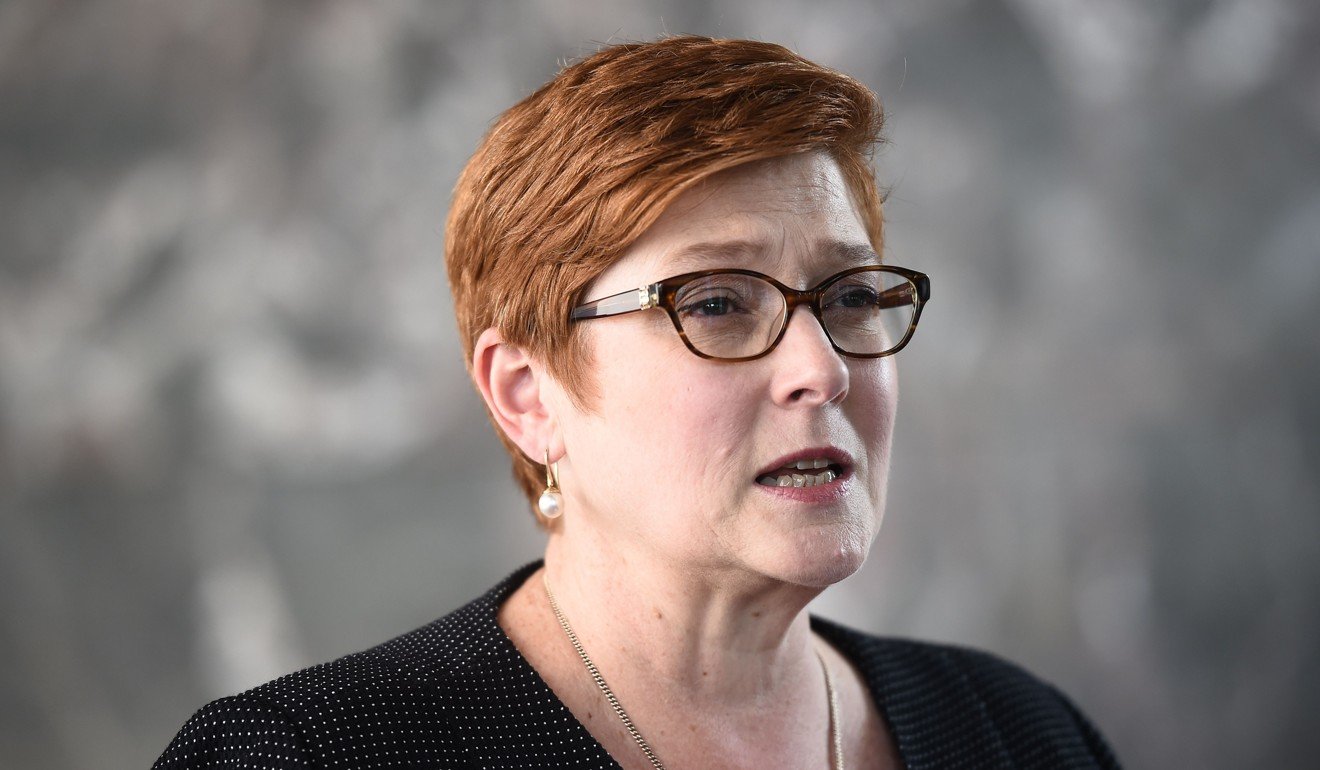 Australian Foreign Minister Marise Payne has played down concerns that the Huang case will affect relations with Beijing. Photo: AFP
Share:
Australia’s main spy agency has long voiced concerns that China was interfering in Australian institutions and using the opaque political donations system to gain access.
It reportedly warned the country’s political elite about taking donations from Huang – who owns a multi-million dollar mansion in Sydney – and a fellow billionaire property developer, Chau Chak Wing.
Huang made headlines in 2017 when it was revealed his company had paid former Labor senator

sweeping reforms
to its espionage and foreign interference laws, strengthening existing offences and introducing new ones targeting foreign influence on domestic politics, including a ban on foreign donations to political parties.
“Foreign adversaries are actively working against Australia’s interests through a variety of means, including obtaining classified information or seeking to influence the outcome of Australia’s democratic processes,” the government said upon passing the laws in June.
Beijing has dismissed the claims of meddling as hysteria and paranoia.
Mark Harrison, senior lecturer in Chinese studies at the University of Tasmania, said the ruling against Huang was a “clear signal” to individuals and organisations seeking influence. Former Australian Labor senator Sam Dastyari was forced to quit politics over his stand on the South China Sea. Photo: EPA
Share:
He also said it highlighted the need for Australian politicians and policymakers to safeguard the country’s democratic system.
“The Australian government’s ruling on Mr Huang’s citizenship application has been firm but measured and clearly intended to avoid any unnecessary escalation,” he said.
“Harm to Australia-China relations would come from a calibrated response from Beijing in accordance with its current policy calculus.
“Mr Huang, however, has attracted a great deal of unnecessary attention through his actions, and Beijing may well consider that Australia’s ruling has addressed a problem that was as much theirs.”

Wei Zongyou, an international relations professor at Fudan University in Shanghai, added that Australia has been increasingly alert to Chinese influence activity and “sharp power”, seen in its wariness about business people and students with Chinese backgrounds.
“With this in mind, Australia’s refusal to naturalise a Chinese businessman is not difficult to understand, and there will be more cases like this,” he said.
“Since Huang was also involved in the influence scandal of an Australian senator, the refusal is even more logical.”
On Wednesday Labor leader Bill Shorten – who polls tip to become Australia’s next prime minister – dodged questions about whether his party would return donations from Huang.
“Well, we stopped taking money from him a couple of years ago,” he said. “In fact, Labor stopped taking donations from that gentleman and another person before the law caught up with our position.”