Without corruption, can the Chinese Communist Party function?

Without corruption, can the Chinese Communist Party function? Thomas Kwok, former co-chairman of Sun Hung Kai Properties Ltd., right, arrive at the High Court in a prison van in Hong Kong on Dec. 22, 2014. Kwok awaits sentencing after he was convicted on Dec. 19 of conspiring with Hong Kong’s former No. 2 official to commit misconduct in public office. 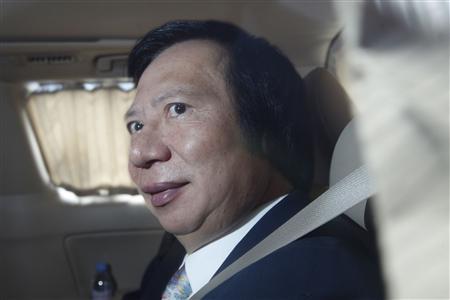 Thomas Kwok, [what a beauty he is...lol]

BEIJING – As China moves into the third year of its far-reaching anti-corruption campaign, experts and officials are worrying that without the grease of bribes, projects are stagnating and the economy is taking a hit.
Across China, more than 100,000 officials have been disciplined since Xi Jinping’s anti-corruption drive began, according to the government’s own figures.

As a result, many others are sitting on their hands, delaying decisions and failing to grant approvals for investment projects, either out of fear that they could be caught up in a future corruption probe, or because, without a bribe, they simply lack any incentive to act.
The problem has become so severe it is ringing alarm bells at the top levels of government.
On Monday, Premier Li Keqiang demanded that local officials sign a written pledge to carry out major economic and social policies faithfully, saying that their dereliction of duty had slowed the economy, according to state media.
Some officials, he said, were “taking a wait-and-see attitude, being reluctant to implement major policies of the central government,”China Daily reported.
Ren Jianming, a professor of clean governance at Beihang University in Beijing, said officials were not used to a system that ran without corruption.
“Developers don’t believe that, without bribing, they would get a project, and officials don’t believe that, without bribing, they could be promoted,” he said.
“They don’t trust a clean system.
“Officials have stopped or delayed making decisions to avoid risks. Even if they don’t take a bribe now, they might be suspected or reported. Then their previous corruption would be found out.”
Graft has certainly not gone away, but the anti-corruption campaign has taken a toll on the sales of luxury goods and on business at high-end restaurants and hotels.
Some karaoke bars, where officials were softened up with alcohol and women, have closed their doors; the former Portuguese enclave of Macao has been hit hard by a sharp decline in gambling revenues, the mainstay of its economy.
The new reluctance among Chinese officials to act appears, as Li said, to have accelerated China’s economic slowdown, although the exact effect is hard to measure — not least because official statistics are not particularly credible.
“Anecdotally, this has had a real impact on investment projects (domestic and foreign-invested) for which approvals are not forthcoming,” Arthur Kroeber, head of research at consultants Gavekal Dragonomics, wrote in an e-mail, describing anti-corruption as “just one of a set of policies designed to slow GDP growth to a more sustainable rate.”
Lu Ting, a Hong Kong-based economist at Bank of America Merrill Lynch, warned in a report last year that the campaign was creating “political paralysis” that was depressing investment.
He estimated at the time it could shave around one percentage point off overall 2014 economic growth, even if the figures reported by officials probably ended up being inflated for political reasons.
“Nobody wants to do anything,” said one official in Beijing, who declined to be identified while speaking on a sensitive subject.
“If we do things, we are exposed to all kinds of risks, including political risks. And we don’t have financial incentives.”
Ren said some hospitals had apparently stopped buying new equipment because decision-makers were concerned about being investigated for corruption, while one businessman in Beijing said the campaign had not only depressed demand but also created new uncertainties.
“Before, when we wanted to get things done, we invited officials to dinner,” the businessman said. “If they showed up, we knew things would get done. But they don’t show up, so we don’t know what will happen.”
Minxin Pei, director of the Keck Center for International and Strategic Studies at Claremont McKenna College, says officials are engaged in a form of non-cooperation, of “passive resistance” to Xi’s efforts to overhaul the party.
“He has taken away their cheese without offering anything in return,” he said.
“They are saying: ‘If you don’t allow us to have a comfortable, corrupt life, we are not going to work for you.’”
Officials, Pei argued, know that the party’s very survival would be threatened if they stopped working indefinitely and the economy sank, and are demanding to be allowed to return to their corrupt ways.
“They are engaged in a test of will with Xi Jinping,” he said.
Some economists argue that the anti-corruption drive will ultimately make China’s economy more efficient and lower business costs, just as similar campaigns in Hong Kong and Singapore were credited with doing in the 1970s.
Foreign business executives say it could help level the playing field.
“It takes the stress away,” Joerg Wuttke, president of the European Chamber of Commerce in China, told Bloomberg last year.
“You’re not afraid that somebody gets an order because he found a better champagne or something like that. It’s not Singapore yet, but it’s a very positive development.”
Meanwhile, Bank of America’s Lu expects the campaign to have less negative impact on economic growth this year, partly because, having consolidated power, “the government regains the authority to either force or entice government officials to perform.”
In addition, he wrote in a research note last month, “younger officials promoted in the past two years are either cleaner or are more loyal to the current government. These officials tend to be more proactive in boosting growth.”
But others are not so sure that the campaign will have a lasting effect.
“The party knows it cannot totally clean the system because the problem of corruption has been around for many years,” said Li Yongzhong, a senior researcher working within the anti-corruption system.
“It’s a consequence of China implanting the Soviet system, with a concentration of power, and officials being appointed by their supervisors rather than elected. Without reform of the system, appointing new officials can only treat the symptoms. It won’t make any fundamental difference.”
Posted by Conan Doyle at 9:50 AM